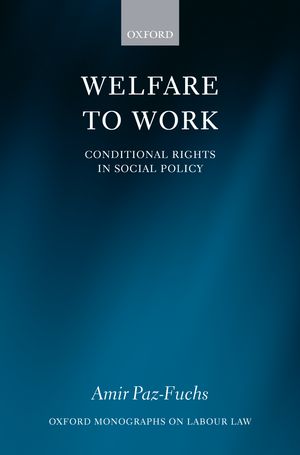 Welfare to work programmes aim to assist the long-term unemployed in finding work; increasing labour market flexibility, eliminating dependency, and tackling social exclusion. They have been implemented in many Western countries. This book focuses on an important and novel feature of these programmes: they replace the rights-based entitlements that have characterized the welfare state for decades with conditional rights dependent on the fulfilment of obligations: conditions are attached to the benefits received.

This new type of social contract between the claimant and the State carries with it a new construction of the relationship between rights and responsibilities, and a new interpretation of citizenship. Paz-Fuchs examines the theoretical underpinnings of welfare-to-work programmes, incorporating a comparative analysis of the UK and USA, where the ideal of social citizenship is being curtailed through welfare reforms. He argues that when the rhetoric of the social contract is used to imply a continuous contract between citizens and the state, a vast array of conditions on welfare can be legitimated, including workfare; the obligation to accept any job offer; and moral and social preconditions that are based on a vague notion of reciprocity.

Paz-Fuchs argues, by contrast, that conditional welfare undermines civil rights such as the right to privacy and family life by requiring welfare claimants to change their behaviour. He contends that strengthening welfare rights and relaxing preconditions on entitlement would better serve the objectives that welfare to work programmes are supposed to advance.

Contents:
Acknowledgments
Table of Treatises, Statutes and Official Publications
Table of Cases
INTRODUCTION
1. THE SOCIAL CONTRACT IN THE MODERN WELFARE STATE
2. WELFARE TO WORK PROGRAMMES UNDER THE POOR LAWS;
3. CURRENT WELFARE-TO-WORK PROGRAMMES
4. FROM EQUALITY TO THE RIGHT TO WELFARE
5. WELFARE, WORK, AND SOCIAL INCLUSION
CONCLUSION
BIBLIOGRAPHY.