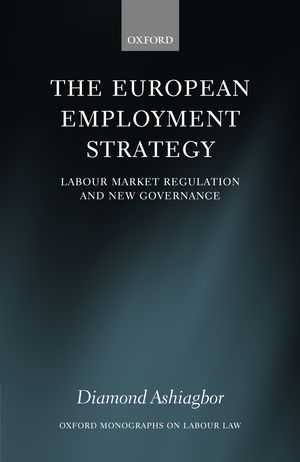 Labour law and social policy have long provided an arena within which key debates over the depth and pace of European integration have taken place. Increasingly, as the European Union's employment policy has matured, employment and economic policy discourses have come to displace discourses around social policy and social law, a displacement which has occurred in tandem with a shift from legislative harmonisation to the use of 'soft law' and governance by means of guidelines.

This book charts the evolution of the European Employment Strategy and the new forms of governance to which it has given rise, in particular the 'open method of coordination'. It offers an interdisciplinary exploration of European social law and employment policy, scrutinizing the law and economics of labour market regulation in the European context and responding to the economic critique of traditional notions of social protection. Through a detailed examination of the legal and economic underpinnings of the European Employment Strategy, the author outlines the implications of this strategy for labour law, social protection and industrial relations within the EU.

Using the open method of coordination in the European Employment Strategy as a case study, the book also provides a timely contribution to the growing literature on 'new governance' in the EU. This innovative form of governance has the potential to forge a middle course through the regulatory choices facing the EU: the choice over the appropriate level of regulation in the EU, whether national or supranational; that over the legitimate role for the state in regulating or deregulating the labour market; and ultimately, the choice between centralised harmonization and regulatory competition.