A Right to Care? Unpaid Work in European Employment Law 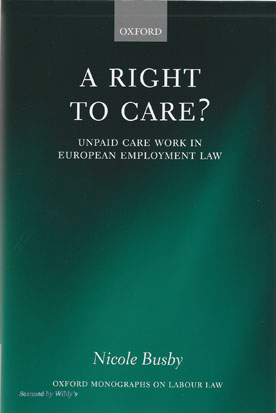 This book considers the reconciliation of unpaid care and paid work which is among the most pressing and difficult problems currently facing employment law.

The incompatibility of carers' needs and the demands of the labour market is commonly identified in relation to working mothers, but is by no means confined to this group as dependency for aspects of personal care can arise as a result of disability, illness or aging.

In all of its forms, unpaid care is predominantly provided by women so that its intersection with paid work is severely gendered. In recent years European integration has focused on the need to increase employment rates whilst maintaining labour market flexibility.

Many workers who seek to combine unpaid care with paid employment find themselves engaged in increasingly precarious forms of work, yet legal and policy responses have, to date, been reactive and incremental, resulting in a framework which is operationally ineffective in certain respects.

Nicole Busby explores the potential for the development of a specific right to care within European employment law which would facilitate the reconciliation of these two central aspects of an individual's life and, in raising the status of care, would assist in the rebalancing of paid and unpaid work between men and women.

The central premise is that the current constitutional and regulatory framework is in fact sufficiently flexible to take account of the diverse circumstances and resulting needs of working carers and that the European Court of Justice has the competence and capability to provide the necessary creativity to give effect to such a right. She argues that what is needed to instil coherence and consistency is a specific focus on unpaid work within European employment law, and provides a policy solution on how this should be brought about.