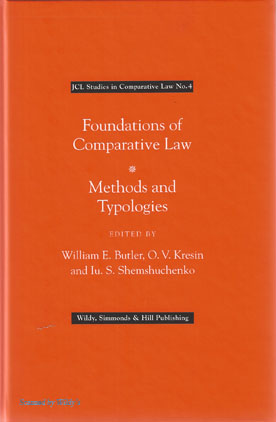 The first book in decades to explore the historical, jurisprudential, and methodological foundations of modern comparative legal studies in the former Soviet Union, it is without precedent there in its breadth of authorship and methodological originality.

For the western reader it constitutes a thoroughly representative introduction to the New Wave of comparative legal studies on the territory of the Independent States. Some issues that engage comparatists there are long familiar in the West; others are relatively new to the field in general, usually with an unusual twist generated by Eastern experience or philosophical disposition.

Individual chapters address the periodization of comparative law, the place of Russia and Ukraine on the legal map of the world, the renaissance of Slavonic law, canon law, convergence between Anglo-American and Romano-Germanic legal systems, the integrating role of international law, and various approaches to typologies of modern legal systems.