A Court in the City: Civil and Commercial Litigation in London at the Beginning of the 21st Century 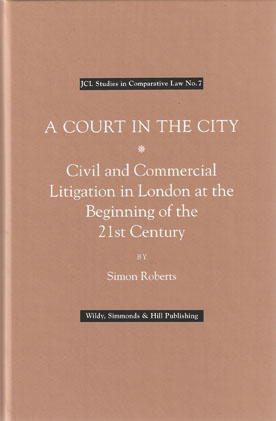 This is a study, from a sociological/anthropological perspective, of the shifting emphasis in English civil justice from adjudication to settlement and mediation.

It gives particular attention to the work of the Mayor’s and City of London Court, contextualizing some of the findings of the author's recent fieldwork there in a discussion of the broader transformations that have taken place in both civil justice and the anthropological and sociological discourse about the nature of law and its place in society.

Situated next to the Guildhall, in the heart of the city, the Mayor’s and City of London Court claims to be the oldest civil court in England. This volume examines the contemporary work of the court in sponsoring settlement against the backdrop of a Victorian building constructed to deliver trial and judgment.

Simon Roberts has taught at the LSE since 1964. His main teaching and research interests are in the anthropology of law, the law of property and the field of alternative dispute resolution.

Contents:
PART A: INTRODUCTORY
I. A Court
PART B: REFLECTING ON THE ETHNOGRAPHY OF LAW AND DISPUTE PROCESSES
II. An Ethnographic Perspective
III. Three case histories
PART C: THE CHANGING MEANING OF ‘A COURT’
IV. The Normative and Governmental Context of Court-like Institutions
V. Negotiation and Mediation in the Spectrum of Dispute Processes
VI. The Procedural Environment of the Court
PART D: A CASE STUDY – THE MAYOR’S AND CITY OF LONDON COURT
VII. The Mayor’s and City of London Court
VIII. Court Sponsorship of Settlement
IX. The Mediation Scheme
PART E: A CONCLUSION
X. Tradition and Ritual in the Changing Exercise of State Power;
Bibliography
List of Cases.