Exclusions from Patentability: How Far Has the European Patent Office Eroded Boundaries 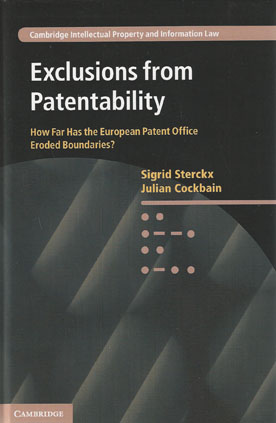 The analysis shows how other intellectual property treaties, such as UPOV, the Strasbourg Patent Convention, PCT, the EU Biotech Directive and TRIPS have affected the framing of the exclusions.

Particular attention is given to those exclusions considered the most contentious (computer programmes, discoveries, medical treatments, life forms and agriculture) and those decisions which have been most influential in shaping the approaches by which the exclusions have been interpreted.

Contents:
1. Introduction
2. The historical development and current scope of the European Patent Convention
3. Computer programs
4. Discoveries
5. Methods of medical treatment and diagnosis
6. Essentially biological processes for the production of plants and animals
7. Plant and animal varieties
8. Morality and 'ordre public'
9. Towards a coherent interpretation of the exclusions
10. Conclusion.