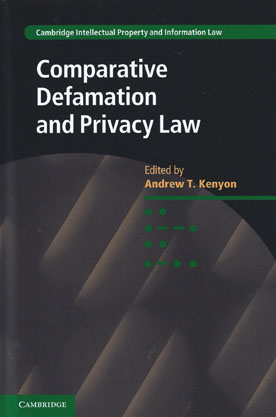 Defamation and privacy are now two central issues in media law. While defamation law has long posed concerns for media publications, the emergence of privacy as a legal challenge has been relatively recent in many common law jurisdictions outside the US.

Aimed at a wide legal audience, it brings together leading and emerging analysts of media law to address current and proposed reforms and the impact of changes in communication environments, and to re-examine basic principles such as harm and free speech.

This book will be of interest to all those working on commonwealth or US law, as well as comparative scholars from wider jurisdictions.

Contents:
1. Defamation and privacy in an era of 'more speech' Andrew T. Kenyon
2. 'Anyone ... in any medium'? The scope of Canada's responsible communication defence Hilary Young
3. 'Ceci n'est pas une pipe': the autopoietic inanity of the single meaning rule Andrew Scott
4. New York Times v. Sullivan at 50 years: defamation in separate orbits David Partlett
5. Defamation and democracy Russell L. Weaver
6. 'A reasonable expectation of privacy': a coherent or redundant concept? Eric Barendt
7. The effects of media intrusion into grief: a case study Nicole Moreham and Yvette Tinsley
8. Press freedom, the public interest and privacy Gavin Phillipson
9. The Atlantic divide on privacy and free speech Kirsty Hughes and Neil M. Richards
10. The 'right to be forgotten' by search engines under data privacy law: a legal and policy analysis of the Costeja decision David Lindsay
11. 'Privacy for the weak, transparency for the powerful' Melissa de Zwart
12. The trouble with dignity Amy Gajda
13. The uncertain landscape of Article 8 of the ECHR: the protection of reputation as a fundamental human right? Tanya Aplin and Jason Bosland
14. Vindicating reputation and privacy David Rolph
15. Divining the dignity torts: a possible future for defamation and privacy Ursula Cheer
16. Reverberations of Sullivan? Considering defamation and privacy law reform Andrew T. Kenyon and Megan Richardson.