Media Freedom as a Fundamental Right 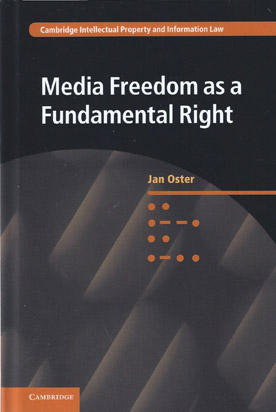 Domestic constitutions and courts applying international human rights conventions acknowledge the significance of the mass media for a democratic society, not only by granting special privileges but also by imposing enhanced duties and responsibilities to journalists and media companies. However, the challenges of media convergence, media ownership concentration and the internet have led to legal uncertainty.

Should media privileges be maintained, and, if so, how is 'the media' to be defined? To what extent does media freedom as a legal concept also encompass bloggers who have not undertaken journalistic education? And how can a legal distinction be drawn between investigative journalism on the one hand and reporting on purely private matters on the other?

To answer these questions, Jan Oster combines doctrinal and conceptual comparative analysis with descriptive and normative theory, and argues in favour of a media freedom principle based on the significance of the media for public discourse.

Contents:
Introduction: aim, scope and method of this study
Part I. The Theoretical Foundations of Media Freedom:
1. The rationales for freedom of expression
2. Theory of media freedom
Part II. General Rules on Media Freedom:
3. Beneficiaries of media freedom: who is 'the media'?
4. The content of media freedom: media speech privileges and institutional protection of the media
5. The notion of an 'interference' with media freedom
6. Justification of an interference with media freedom
Part III. Specific Limitations to Media Freedom:
7. Personality rights and intellectual property as 'rights of others'
8. Threats to public order interests: national security, territorial integrity, public safety and prevention of disorder and crime
9. The protection of health and morals
10. Maintaining the authority and impartiality of the judiciary
11. Incitement to hatred
12. Religiously offensive publications
13. Restrictions on commercial publications
14. Media pluralism
Conclusion.

Drafting Copyright Exceptions: From the Law in Books to the Law in Action
Emily Hudson
ISBN 9781107043312
To be published April 2020
Cambridge University Press