Berlingieri on Arrest of Ships Volume I: A Commentary on the 1952 Arrest Convention 6th ed 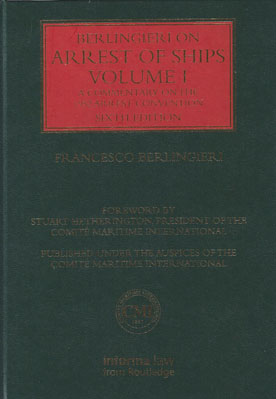 Now presented in two convenient volumes, the sixth edition of Berlingieri on Arrest of Ships is an invaluable source of information, detailing the claims in respect of which a ship may be arrested, the conditions for obtaining an order of arrest, the need for a security, the manner by which the ship that has been arrested may be released, the possibility of a multiple arrest and the jurisdiction on the merits.

Focused on the 1952 Arrest Convention, Volume I provides a unique, thorough, and updated commentary, analysing each provision with reference to its interpretation in a significant number of States Parties.

Written by a renowned expert in the field, and analysing the various conventions relating to the arrest of ships in an article-by-article and paragraph manner, this book is a useful reference tool for practitioners, as well as academics and post-graduate students of maritime law.

Contents:
1. History of the 1952 Arrest Convention
2. The way to uniformity of maritime law in respect of arrest of ships
3. Scope of application
4. Definitions of Arrest, Person and Claimant
5. The Maritime claims
6. Claims in respect of which a ship may be arrested under the Convention
7. Jurisdiction for the arrest
8. Jurisdiction on the merits and related matters
9. Arrest or detention by public authorities
10. Procedure relating to the arrest
11. Arrest of the ship in respect of which the claim is asserted
12. Arrest of "sister" ships
13. Arrest of associated ships
14. Arrest of ships owned by the charterer in respect of claims of the owner of the chartered ship
15. Right of rearrest and multiple arrest
16. Release of the ship from arrest
17. When the release of a ship under arrest is not permitted
18. Liability for wrongful arrest