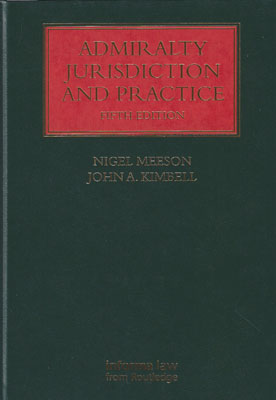 Admiralty Jurisdiction and Practice is the definitive work on litigation in the Admiralty Court.

It provides unrivalled commentary and analysis of the key principles of admiralty law, from jurisdiction and procedure to forms and precedents, and is firmly established as the leading reference guide for today’s maritime practitioner.

The authors also deal with several topics not covered elsewhere, including the impact of insolvency, the interplay between jurisdiction and practice, limitation periods, the role of international conventions, and collision action rules.

The fifth edition has been fully updated to include new case law and vital changes in Commercial Court practice and procedure. It also includes brand new material on the topical jurisdictions of Hong Kong and South Africa, including a comparison to English law and expert commentary on important issues such as ship arrest.

This book is a first choice for all those concerned with admiralty law.