Developing Countries and the Multilateral Trade Regime: The Failure and Promise of the WTOs' Development Mission 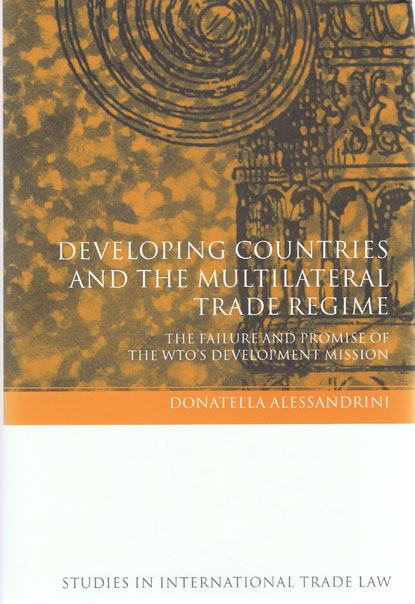 This book explores the way in which 'development' has functioned within the multilateral trade regime since de-colonisation.

In particular, it investigates the shift from early approaches to development under the GATT to current approaches to development under the WTO. It argues that a focus on the creation and transformation of a scientific apparatus that links forms of knowledge about the so-called Third World with forms of power and intervention is crucial for understanding the six decades long development enterprise of both the GATT and the WTO.

The book is both topical and necessary given the emphasis on the current round of negotiations of the WTO. The Doha 'Development' Round has been premised on two assumptions.

Firstly, that the international community has undertaken an unprecedented effort to address the imbalances of the multilateral trading regime with respect to the position of its developing country members. Secondly, that its successful conclusion represents an historic imperative and a political necessity for developing countries.

Through a sustained analysis of the interaction between development thinking and trade practices, the book questions both assumptions by showing how development has always occupied a central position within the multilateral trading regime. Thus, rather than asking the question of what needs to be done in order to achieve 'development', the book examines the way in which development has operated and still operates to produce important, and often unacknowledged, power relations.

Contents:
INTRODUCTION – THE FAILURE AND THE PROMISE OF THE MULTILATERAL TRADING REGIME
I The 'Science of Development' and 'Capitalist Imperialism'
II Development as a 'Discourse' and Development as a 'Trap'
III Outline of the Chapters
1.
THE BRETTON WOODS CONFERENCE: TRADE AND THE 'CIVILISING MISSION' IN THE POSTWAR INTERNATIONAL TRADING REGIME
I The Mandate System and 'the Science of Development'
A Freedom of Transit and Equitable Treatment: The First Regulatory Attempt at a World Trade Order
B . . . and the Extension of Market Imperatives
II The Bretton Woods Conference and the Postwar International Economic Order
A Grounding 'Non-Discrimination' and 'Equal Treatment' in Trade Relations
B The Draft Charter and the London Conference: Of Rules and Exceptions
C The Free-Trade Contradictions of the Charter: Structuring the International Division of Labour
D The Investment Provisions: Protecting Capital Abroad
E The Outcome of the ITO Negotiations
III The General Agreement on Tariffs and Trade (GATT)
Conclusions
2.
THE 'SCIENCE OF DEVELOPMENT' AND THE GATT NORM
I The Emergence of the Development Enterprise
A The 'Professionalisation' and 'Institutionalisation' of Development
B Development Economics' 'Growth' and 'Progress'
C Development Economics' Normative Assumptions
D Reformist Dependency Theories and the Development Matrix: The Structuralist School of Thought
II The GATT Development Mission
A The GATT First Review Session: Positing Developing Countries' Failure
B The Haberler Report and Committee III: Tracing Discrimination
C The GATT Part IV: Discharging Responsibility
D Enabling Non-Reciprocity
E A'Differential and More Favourable Treatment'?
F Assessing the GATT's Flexibility
Conclusions
3.
THE NEO-LIBERAL TRANSFORMATION OF DEVELOPMENT THINKING AND THE RENEWED MISSION OF THE MULTILATERAL TRADING REGIME
I The Neo-Liberal Conversion of Development Thinking
A Rational Choice-Based Approach
B . . . and Failing Institutional Arrangements
C Outward-Oriented Policies and Government Controls
II The Neo-Liberal Transformation of the International Trading Regime
A The World Recession and the Restructuring of the International Economy
B Towards a Trade-Service-Investment Driven Market Integration: Enter the 'New Issues'
C Setting the Scene for the New Mandate
D Punta del Este: A Divisive Strategy
III Developing Countries' Re-Alignment: Revisiting the Story
A From the Oil and Debt Crisis to the Structural Adjustment Policies
B The Challenge of Increasing Discrimination
C The Pressure Tactics Unilateralism/Bilateralism/Multilateralism
Conclusions
4.
THE URUGUAY ROUND AND THE CONSTRUCTION OF THE NEW CONSENSUS
I Old and New Issues on the Negotiating Table, Corporate Activism and the Single Undertaking Approach
II The Rise of US Protectionism and the Consolidation of the Pressure Tactic
III The Montreal/Geneva Mid-Term Review: Weakening the Opposition to a Broader Mandate
IV Brussels Ministerial Meeting: Reintroducing Reciprocity
V From Brussels to Marrakesh: Clinton's Aggressive Approach to Market Openness
VI The Final Agreement: Towards an Equal Playing Field?
A The New Issues
B . . . and the Same Old Ones
Conclusions
5.
THE WORLD TRADE ORGANISATION: THE POWER OF TRANSNATIONAL CAPITAL AND THE REDUCTION OF DOMESTIC REGULATORY SPACE
I Assessing the 'Trade Off': the Market Access Issues
A Agriculture
B Textiles and Clothing
C Safeguards and Anti-Dumping
D Implementation Costs
II Liberalisation Rhetoric and Practice: Opening Markets, Protecting Capital
A Investors' Rights in Historical Context
B The Changing Investment Climate of the 1980s and 1990s: Securing Protection Abroad
C The 'Modest' TRIMs Agreement
D The 'Flexible' General Agreement on Trade in Services (GATS)
E The 'Balanced' TRIPs Agreement
Conclusions
6.
OF FAILURES AND PROMISES: THE MANY LIVES OF THE DOHA DEVELOPMENT ROUND
I The Road to Doha: Reflecting on the UR Imbalances
II The Doha Agenda
A Principles and Objectives: Multilateralism, Free Trade, Development
B Work Programme: Towards a Softening of the WTO Neo-Liberal Agenda?
III From Cancun to Geneva: Emerging Oppositions
IV Reaction to Cancun: Silencing Dissent
V GATS'Flexibility': Rhetoric and Negotiating Practice
A The Safeguard Mechanism and Liberalisation of GATS Mode 4: An Uncertain Future
B Targeting Non-Discriminatory Domestic Regulation: GATS Article VI
C Enter Specific Commitments: The Request-Offer Approach
VI TRIPs: Transfer of Technology v. Investors' Rights
A Substantive TRIPs-plus Standards in Investment Agreements
B Investor-to-State Dispute Resolution
C Expropriation
VII From Hong Kong to Geneva: The Last Breath of the Doha Round?
A The July Framework
B The Hong Kong Ministerial Declaration
C Suspension, Crisis, Resumption
Conclusions
CONCLUSIONS: THE DEVELOPMENT MISSION OF THE WTO
I The First Perspective: The Reform of the International Trading System
A The GATS and the Financial Crisis
B Addressing the Challenge, Strengthening the Mindset
II The Second Perspective: The WTO and its Civilising Mission
III The WTO's Market-Access Mindset
IV The 'Political Rationality' of Development
Bibliography
Index