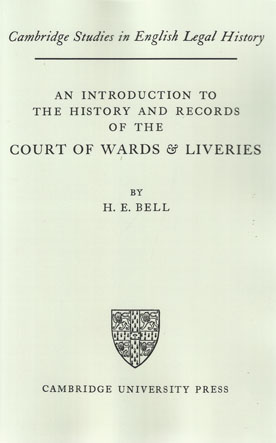 Originally published in 1953, this book provides a comprehensive analysis of the Court of Wards and Liveries. The court was established on 1540 as a means of administering the system of feudal dues, it was additionally responsible for wardship and livery issues.

Formally abolished in 1660, the court had previously ceased to have a function due to the abolition of feudal tenures by the Long Parliament in 1646. Consummately researched, the text was compiled by the author during a period of employment by the Public Record Office, this allowed for extensive access to the Court's records and other important documentation.

Contents:
Preface
Abbreviations used in the footnotes
1. Wardship and livery in the reigns of Henry VII and Henry VIII
2. The officers of the court
3. The revenues of the court 4. The administration of livery and wardship
5. Judicial business of the court
6. The welfare of wards and idiots
7. The agitation against the court
8. The final days of the court
9. The site and buildings of the court
10. The records of the court after its abolition
Appendices
Index
Tables.