Sir Edward Coke and the Reformation of the Laws: Religion, Politics and Jurisprudence, 1578-1616 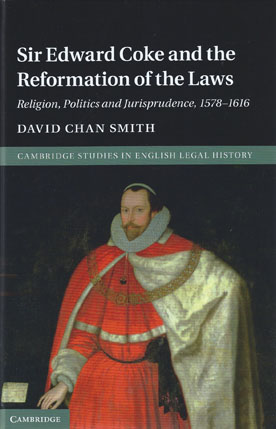 Throughout his early career, Sir Edward Coke joined many of his contemporaries in his concern about the uncertainty of the common law. Coke attributed this uncertainty to the ignorance and entrepreneurship of practitioners, litigants, and other users of legal power whose actions eroded confidence in the law.

Working to limit their behaviours, Coke also simultaneously sought to strengthen royal authority and the Reformation settlement. Yet the tensions in his thought led him into conflict with James I, who had accepted many of the criticisms of the common law.

Sir Edward Coke and the Reformation of the Laws reframes the origins of Coke's legal thought within the context of law reform and provides a new interpretation of his early career, the development of his legal thought, and the path from royalism to opposition in the turbulent decades leading up to the English civil wars.

Contents:
1. Introduction
2. Uncertainty and the reformation of the laws
3. 'The most dangerous oppressor': the misuse of the law
4. Confidence and corruption: the law in the Fens
5. Identity and narratives of the past
6. Reason and reform
7. Pragmatism and the High Commission
8. Chancery, reform, and the limits of cooperation
9. Delegation and moral kingship
10. Conclusion.