Pettyfoggers and Vipers of the Commonwealth: The Lower Branch of the Legal Profession in Early Modern England 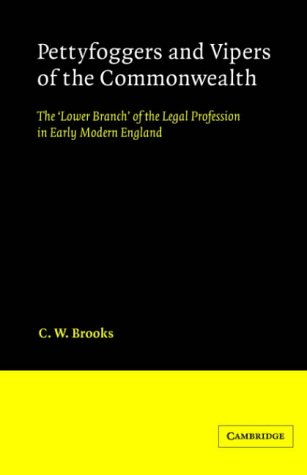 Historians have long recognized that members of the lower branch of the legal profession, the ancestors of the modern solicitors, played an important part in early modern English society, but difficulties in establishing their identities and recovering their career patterns have hitherto left them virtually unstudied.

This work charts the massive sixteenth-century increase in central court litigation and offers an explanation of it largely in terms of social change and the decline of local jurisdictions. At the same time, it argues that the period witnessed a major turning point in the relationship between the legal profession and English society. The number of practitioners in the lower branch who were associated with the legal institutions of London grew to such an extent that by 1640 the ratio of lawyers to population was not much different from that in the early twentieth century.

Although this tremendous growth in the amount of legal business and the number of legal practitioners created some serious administrative problems, the commonly held view that the lower branch in this period was largely untrained, dishonest, and uncontrolled is no more than a myth.