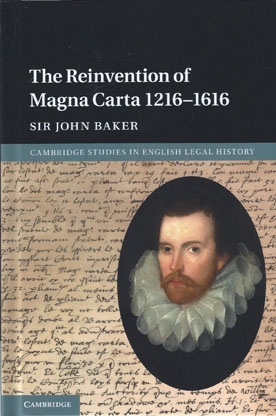 Magna Carta was largely ineffective for practical purposes between the fourteenth century and the sixteenth, late-medieval law lectures giving no hint of its later importance.

A treatise by William Fleetwood (c.1558) was still in the traditional mould, but the lectures of the 'Puritan' barrister and MP Robert Snagge in 1581, and the speeches and tracts of his colleagues, advocated new uses for it.

After centuries of oblivion, in 1587 there were eight reported cases in which chapter 29 was cited. Sir Edward Coke made extensive claims for chapter 29, linking it with habeas corpus, and then as a judge (1606-16) he deployed it with effect in challenging encroachments on the common law and the liberty of the subject.

This book ends in 1616 with the lectures of Francis Ashley, summarising the effects of the new learning, and then Coke's dismissal for pushing his case too hard. A challenging new account.