The Constitution of Ireland: A Contextual Analysis 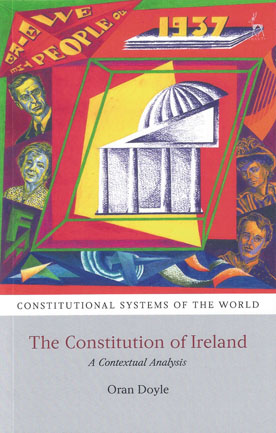 The book therefore eschews an approach that presents the Parliament as legislator, the Government as executive organ, and the Courts as judicial organ. This approach would need to be heavily qualified to recognise the Government’s domination of legislation and does not easily allow for a discussion of accountability.

Rather, having begun with the historical context (both political and institutional) and the relationship between the Irish state and the various legal orders that apply to it, the book presents the constitutional offices and officers, as well as the relations between them. There is a focus both on their legal roles and the sorts of people who typically fill those roles.

This raises meaty and substantial issues such as the role of the President, the impact of a PR STV voting system on legislative priorities, judicial intervention in electoral processes, the nexus between the lower House of Parliament (the Dáil) and the Government, the domination of the judiciary by the upper middle classes, and tension between the judiciary and the electorally accountable organs of government.

This chapter is the lynchpin of the book and provides crucial context for the constitutional processes considered in the subsequent chapters: legislation, governance and administration, accountability, and fundamental rights.