The Foundations and Traditions of Constitutional Amendment 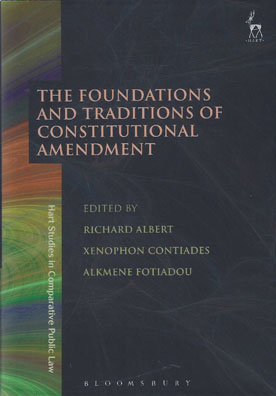 Much of the innovative dialogue ongoing in the field, creating new theories and understandings, revolves around comparative constitutional amendment.

This volume aspires to be the first to cover comprehensively the new dimensions of the study of constitutional amendment, and will become a reference point for all scholars working on the subject. The volume covers all the topics where innovative work is being done, such as the notion of the people, the trend of empirical quantitative approaches to constitutional change, unamendability, sunrise clauses, constitutional referenda, reconceptualizing the conventional divide between constituent and constituted powers, among others important subjects.

Moreover, the volume brings together some of the most recognizable names currently writing in the field. Most importantly, the volume is in many ways a dialogue that cuts through these innovative conceptualizations and highlights scholarly disagreement and, in so doing, puts ideas to the test.

The volume therefore captures the fierce ongoing debates on the relevant topics, it reveals the current trends and contested issues, and it offers a variety of arguments elaborated by prominent experts in the field. It will open the way for further dialogue.