The Nordic Constitutions: A Comparative and Contextual Study 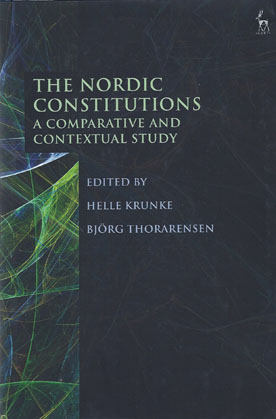 This book analyses the Nordic constitutional systems of Denmark, Finland, Iceland, Norway and Sweden in a comparative context.

It has two main aims: first to fill a gap in the literature by providing an accessible English language account of the Nordic constitutions, and second by providing a comparative analysis of them, revealing their similarities and differences within their political, historical and cultural contexts.

In this respect, the book challenges the assumption that the Nordic countries form a homogeneous constitutional system due to their cultural and historical affinities, a view not necessarily supported by a close comparative examination.

A key issue is EU membership, where the Nordic countries have made different choices at different times, and the book will show how this has affected the individual countries and whether a divide between EU member states (Denmark, Finland and Sweden) and non-members (Iceland and Norway) has appeared.

Another key issue is how the ECHR has impacted the Nordic constitutional systems and whether the convention draws the Nordic systems closer to each other. The book represents a first of its kind in the English language, and will provide constitutional scholars with a valuable comparative resource on the Nordic region.