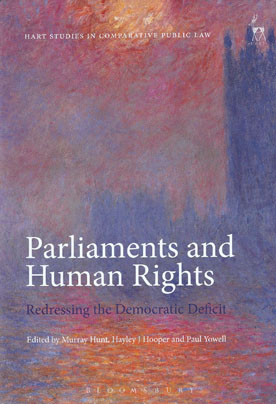 This book is the first volume to unite theoretical and practical insights into the protection of human rights by legislatures from a number of domestic jurisdictions, international organisations, and leading scholars.

It also contains studies on the role of the Council of Europe and the European Court of Human Rights, and a critical scholarly examination of the relationship between parliamentary and curial institutions within the context of the protection of human rights. Within the volume there are several central original contributions from key figures working at the heart of trans-national organisations dedicated to the legislative protection of human rights.

The contributions from academic scholars investigate the consequences of legislative protection of human rights in the United Kingdom parliament drawing upon both empirical evidence and theoretical perspectives. The volume concludes with a scholarly analysis of the implications which flow from the project of democratisation of human rights in a wider context.

Responsible Government and the Australian Constitution: A Government for a Sovereign People
Benjamin B. Saunders
ISBN 9781509955794
To be published March 2023
Hart Publishing