Judicial Decision-Making in a Globalised World: A Comparative Analysis of the Changing Practices of Western Highest Courts 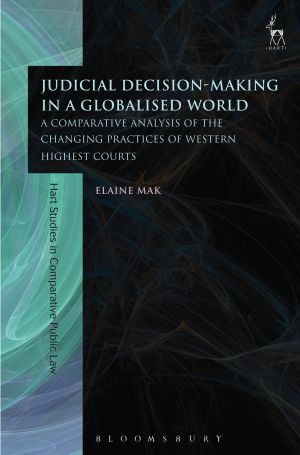 Why do judges study legal sources that originated outside their own national legal system, and how do they use arguments from these sources in deciding domestic cases? Based on interviews with judges, this book presents the inside story of how judges engage with international and comparative law in the highest courts of the United Kingdom, Canada, the United States, France and the Netherlands.

A comparative analysis of the views and experiences of the judges clarifies how the decision-making of these Western courts has developed in light of the internationalisation of law and the increased opportunities for transnational judicial communication. While the qualitative analysis reveals the motives that judges claim for using foreign law and the influence of 'globalist' and 'localist' approaches to judging, the author also finds suggestions of a convergence of practices between the courts that are the subject of this study.

This empirical analysis is complemented by a constitutional-theoretical inquiry into the procedural and substantive factors of legal evolution, which enable or constrain the development and possible convergence of highest courts' practices. The two strands of the analysis are connected in a final contextual reflection on the future development of the role of Western highest courts.

Governance by Numbers: The Making of a Legal Model of Allegiance
Alain Supiottranslated by Saskia Brown
ISBN 9781509936977
To be published March 2020
Hart Publishing
£30.00