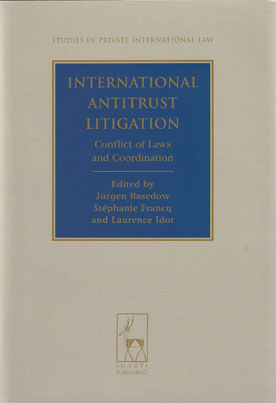 The decentralisation of competition law enforcement and the stimulation of private damages actions in the European Union go hand in hand with the increasingly international character of antitrust proceedings.

As a consequence, there is an ever-growing need for clear and workable rules to co-ordinate cross-border actions, whether they are of a judicial or administrative nature: rules on jurisdiction, applicable law and recognition as well as rules on sharing of evidence, the protection of business secrets and the interplay between administrative and judicial procedures.

This book offers in-depth analysis of these long neglected yet practically most important topics. It is the fruit of a research project funded by the European Commission, which brought together experts from academia, practice and policy-making from across Europe and the United States.

The sixteen chapters cover the relevant provisions of the Brussels I and Rome I and II Regulations, the co-operation mechanisms provided for by Regulation 1/2003 and selected issues of US procedural law (such as discovery) that are highly relevant for transatlantic damages actions. Each contribution critically analyses the existing legislative framework and formulates specific proposals that would consolidate and enhance cross-border antitrust litigation in Europe and beyond.