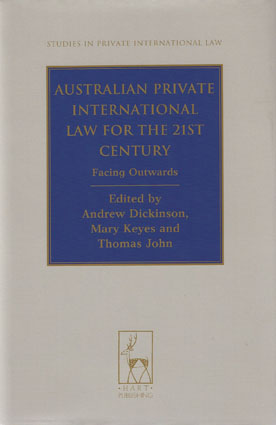 Economic expansion, and parallel increases in tourism and immigration, have brought Australians more frequently into contact with the laws and legal systems of other nations. In particular, in recent years, trade with partners in the Asia-Pacific Region has become increasingly important to the nation's future. At the same time, Australian courts are faced with a growing number of disputes involving foreign facts and parties. In recognition of these developments, and the need to ensure that the applicable rules meet the needs both of transacting parties and society, the Attorney-General's Department launched in 2012 a full review of Australian rules of private international law.

This collection examines the state and future of Australian private international law against the background of the Attorney-General's review. The contributors approach the topic from a variety of perspectives (judge, policy maker, practitioner, academic) and with practical and theoretical insights as to operation of private international law rules in Australia and other legal systems.