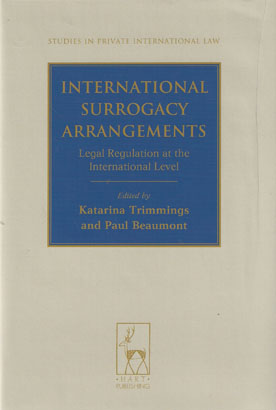 This book addresses the pressing challenges presented by the proliferation of international surrogacy arrangements:-

The book is divided into two parts. Part 1 contains a General Report, which consists of an analysis of the National Reports appearing in Part 2, together with a proposed model of regulation of international surrogacy arrangements at the international level written by the two co-authors, Paul Beaumont and Katarina Trimmings.

The reports are written by domestic specialists, each demonstrating the difficult and urgent problems arising in many States as a result of international surrogacy arrangements. These National Reports not only provide the backdrop to the authors' proposed model regulation, but serve as a key resource for scrutinising the most worrying incompatibilities in national laws on surrogacy.