The Governing Law of Companies in EU Law 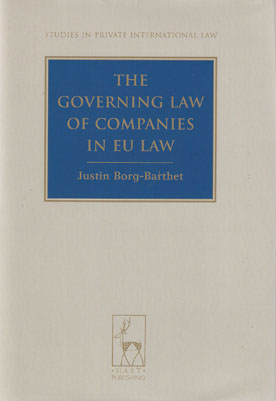 The governing law of companies is a subject which has attracted much attention from academics and practitioners alike ever since the European Court of Justice began receiving references for preliminary rulings concerning the compatibility of protective conflict of corporate law norms with the EC Treaty provisions concerning freedom of establishment.

Although recent developments have been less controversial than the ground-breaking judgment in Centros, they have not only consolidated the general thrust of liberalisation occasioned by the Court of Justice, but have added new dimensions to the regulatory landscape.

These developments include amendments to the European constitutional order enshrined in the Lisbon Treaty, European legislation on cross-border mergers, the proposed statute for a European Private Company, the judgment of the Court of Justice in Cartesio, and a Commission communication that contemplates the introduction of legislation on the governing law of companies.

This book examines these recent developments and appraises the current law, as well as the foreseeable trajectory of the law, within a theoretical setting that addresses the socio-economic and legal-theoretical concerns associated with choices of the governing law of companies.

In addition to considering the present and probable future state of EU law, the book also develops a new theoretical perspective and proposes novel solutions to long-standing dilemmas. In particular, it suggests that the use of information technology may render possible previously impossible compromises between party autonomy and the proper locus of prescriptive sovereignty.