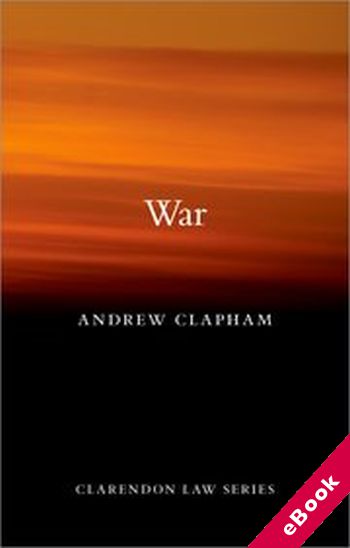 
ISBN13: 9780192538444
Published: July 2021
Publisher: Oxford University Press
Country of Publication: UK
Format: eBook (ePub)
Price: £24.99
The amount of VAT charged may change depending on your location of use.
Convert Currency

How relevant is the concept of war today?

This book examines how notions about war continue to influence how we conceive rights and obligations in national and international law. It also considers the role international law plays in limiting what is forbidden and legitimated in times of war or armed conflict. The book highlights how, even though war has been outlawed and should be finished as an institution, states nevertheless continue to claim that they can wage necessary wars of self-defence, engage in lawful killings in war, imprison law-of-war detainees, and attack objects which are said to be part of a war-sustaining economy.

The book includes an overall account of the contemporary laws of war and delves into whether states should be able to continue to claim so-called 'belligerent rights' over their enemies and those accused of breaching expectations of neutrality. A central claim in the book is as follows: while there is general agreement that war has been abolished as a legal institution for settling disputes, the time has come to admit that the belligerent rights that once accompanied states at war are no longer available. The conclusion is that claiming to be in a war or an armed conflict does not grant anyone a licence to kill people, destroy things, and acquire other people's property or territory.

Contents:
1: The Multiple Meanings of War
2: Declarations of War and Neutrality
3: Outlawing War
4: The Use of Force after the UN Charter
5: War Powers in National Law
6: Triggering the International Law of Armed Conflict
7: Warfare - the Conduct of Hostilities
8: Belligerent Rights and the Future of Naval Economic Warfare
9: Victims of War
10: Accountability for Violations of the Laws of War
Conclusion