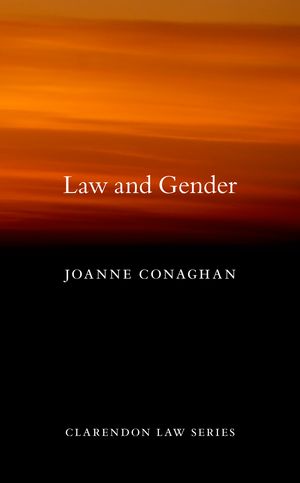 Gender is an increasingly prominent aspect of the contemporary debate and discourse around law. It is curious that gender, while figuring so centrally in the construction and organization of social life, is nevertheless barely visible in the conceptual armoury of law. In the jurisprudential imagination law is gender-less; as a result legal scholarship for the most part continues to hold on to the view that gender plays little or no role in the conceptual make-up, normative grounding, or categorical ordering of law. The official position is that the idea of law and legal fundamentals are, or at least ought to be, gender-independent.

This book challenges these long-held assumptions. Exploring the relationship between law and gender it takes gender as a core concept and analytical tool and examines how law is conceptualized, organized, articulated, and legitimated. How can gender be given meaning in legal texts, doctrine, and practices, and how can gender operate within the law while simultaneously appearing to be outside it? The relationship between gender and the law is relevant to virtually all areas of law including in particular criminal law, tort law, family law, employment law, and human rights. Increasingly issues of gender are perceived as the concern of all, reflecting broader debates in the law, including those of equality and sexuality. Covering the key theoretical and substantive areas of jurisprudence, this volume by Joanne Conaghan will be essential reading for all interested in gender studies and legal theory more widely. It offers a clear, concise introduction to gender studies and central feminist concerns for a legal readership.

Contents:
1. The Incongruity of Law and Gender
2. A Tale of Two Cases
3. Theories of Law and Gender
4. Gendered Legal Histories
5. Gender and the Jurisprudential Imagination
6. The Siren Call of Legal Reasoning
7. Conclusion and Reprise: Why is Justice a Woman?
Bibliography