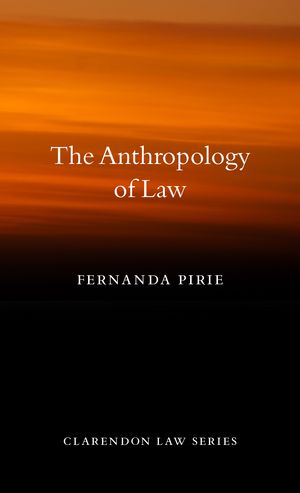 Questions about the nature of law, its relationship with custom, and the distinctive form of legal rules, categories, and reasoning, are placed at the centre of this introduction to the anthropology of law. It brings empirical scholarship within the scope of legal philosophy, while suggesting new avenues of inquiry for the anthropologist. Going beyond the functional and instrumental aspects of law that underlie traditional ethnographic studies of order and conflict resolution, The Anthropology of Law considers contemporary debates on human rights and new forms of property, but also delves into the rich corpus of texts and codes studied by legal historians, classicists, and orientalist scholars. Studies of the great legal systems of ancient China, India, and the Islamic world, unjustly neglected by anthropologists, are examined alongside forms of law created on their peripheries. The coutumes of medieval Europe, the codes drawn up by tribal groups in Tibet and the Yemen, village laws on both sides of the Mediterranean, and the intricate codes of saga in Iceland provide rich empirical detail for the author's analysis of the cross-cultural importance of the form of law, as text or rule, and the relative marginality of its functions as an instrument of government or foundation of social order. Carefully-selected examples shed new light upon the interrelations and distinctions between law, custom, and justice. Gradually an argument unfolds concerning the tensions between legalistic thought and argument, and the ideological or aspirational claims to embody justice, morality, and religious truth which lie at the heart of what we think of as law.