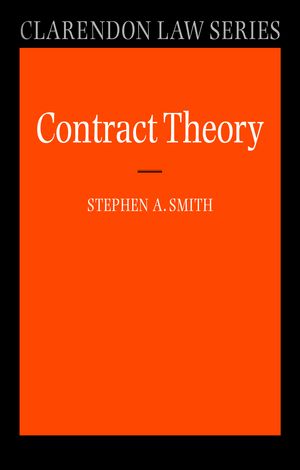 This book is both an examination of, and a contribution to, our understanding of the theoretical foundations of the common law of contract.

The book is in three parts. Part I introduces the idea of 'contract theory', and presents a framework for identifying, classifying, and evaluating contract theories. Part II describes and evaluates the most important general theories of contract; examples include promissory theories, reliance-based theories, and economic theories. In Part III, the theoretical issues raised by the various specific doctrines that make up the law of contract (e.g., offer and acceptance, consideration, mistake, remedies, etc.) are examined in separate chapters.

The legal focus of the book is the common law of the United Kingdom, but the theoretical literature discussed is international in origin; the arguments discussed are thus relevant to understanding the law of other common law jurisdictions.

Contents:
1. WHAT IS CONTRACT THEORY?
2. INTRODUCTION TO GENERAL THEORIES: CLASSIFICATION AND OVERVIEW
3. The Nature of Contractual Obligations: The Analytic Question
4. The Justification of Contractual Obligations: The Normative Question
5. ESTABLISHING AGREEMENT: THE LAW OF OFFER AND ACCEPTANCE
6. The Kinds of Agreements that are Enforced: Formalities, Intention to Create Legal Relations, Consideration, and Estoppel
7. The Kinds of Agreements not Enforced: Substantive Limitiations on Enforceability
8. The Content of the Contract: Interpreting and Implying Terms
9. Excuses for Non-Performance: Duress, Unconscionability, Mistake, Misrepresentation, Frustration, and Discharge for Breach
10. Breach of Contract: The Puzzel of Strict Liability
11. Remedies for Breach