Law and Values in the European Union 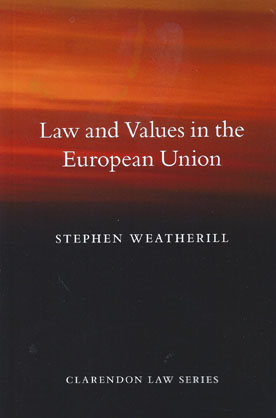 How has European Union developed since its origins in the reconstruction of Europe in the wake of the Second World War, and why has it developed in this fashion?

The principal theme of this book maintains that the EU is a site for the management of the interdependence of the States that are its members. A whole host of challenges - from climate change to security to migration to economic reform - can be tackled more effectively through multilateral action than by unilateral State action and the EU has become the principal location for that action in common.

In essence, the States of the EU are stronger together than apart. In order to achieve multilateral action and participation, the EU requires its own legal order, comprising a range of legislative competences, political and judicial institutions, and a carefully shaped relationship with national law. In one sense, this legal order represents control over State autonomy yet in another it serves as means to ensure States, acting collectively, can meet the aspirations of their citizens in an interdependent world.

The EU, as its power has increased, also needs to address questions of democracy, accountability, respect for fundamental rights and for national and local diversity. It should not be measured against the same benchmarks of legitimacy as a State as it will always fail, but it does need to achieve legitimacy.

It needs, in short, values. And its Treaties aspire to grant it values. Does its system of governance, heavily implicated in the conferral of rights on individuals enforceable against the EU and Member States, today in areas far beyond the economy, live up to those aspirations? And can it? That is the terrain mapped by this book.