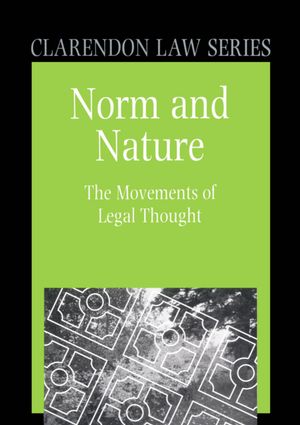 ""Norm and Nature"" deals with the traditional conflict in legal philosophy between positivistic and anti-positivistic theories of law. It examines the conflict with respect to seven central issues in legal philosophy - law as a reason for action, law and authority, the internal point of view to law, the acceptance of law, discretion and principle, interpretation and semantics, and law and the common good.;It has three theses. First, that the opposition to positivism is based on acceptance of, rather than rejection of, claims made by positivism. Secondly, that the conflict between positivism and anti-positivism is irresolvable and finally, that the understanding of why this is so is the key to the understanding of the nature of law. Tension between formal and substantive considerations comprises the essence of law. The central theses presuppose that anti-positivism or natural law theory is defensible as an account of the nature of law. More than half of the book, therefore, is a criticism of the prevailing orthodoxy of legal positivism and a defence of an anti-positivist view.

Contents:
Part 1 Simple positivism.
Part 2 Sophisticated Positivism.
Part 3 Anti-positivism: reasons for action; law and authority; the point of view of legal theory; the acceptance of law; principle and discretion; interpretation and semantics; law and the common good; anti-positivism's conclusions; the movements of legal thought; compatibilism; the concept of law.