Blackstone's Guide to the Corporate Manslaughter and Corporate Homicide Act 2007 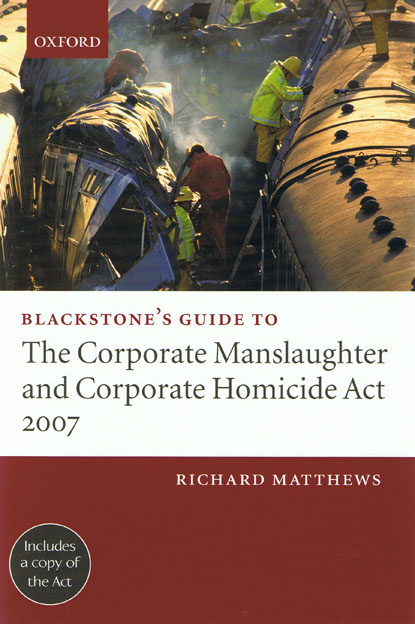 This new Blackstone's Guide provides the complete text of the Corporate Manslaughter Act together with an informed commentary on its probable interpretation and impact. The existing laws on corporate manslaughter have been widely criticised. They are regarded as failing to provide clear, effective offences which enable companies and other organisations to be held accountable for gross failings which have fatal consequences.

The Corporate Manslaughter Act aims to reform and clarify this area, most notably by creating a new, specific offence of 'corporate manslaughter' - an organisation, government department, or other Crown body will be prosecuted for this if a gross failing by its senior managers to take reasonable care for the safety of their workers or members of the public were to cause a person's death.

This new offence combines a number of previously established concepts such as liability arising through the breach of duty of care owed by operation of the law of negligence, with novel elements such as the requirement for the jury in any trial to consider whether the defendant 'failed to comply with any relevant health and safety legislation or guidance', and the partial removal of Crown immunity. This guide analyses and comments upon the interpretation of the established concepts, and offers a reasoned account of the likely interpretation of the novel elements, relating both to criminal and health and safety law as a whole.