Blackstone's Guide to the Extradition Act 2003 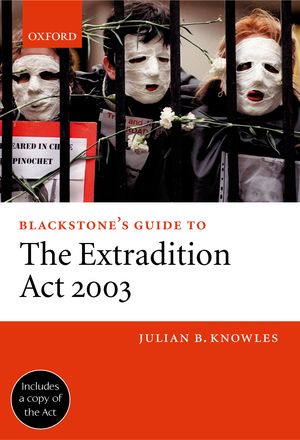 The Blackstone's Guide Series is a well established series of practical guides to the latest new legislation. The Guides all contain a full copy of the Act together with commentary on the effects, extent and scope of the legislation.

The Guides are concise, accessible and clearly laid out, essential tools for those practising in the area. The Extradition Act 2003 came into force on 1st January 2004. The Act is a major piece of legislation and will radically overhaul current extradition procedure with the aim of simplifying and speeding up the extradition process.

It will give effect to the European Arrest Warrant, which for the first time will allow foreign warrants to be directly enforced in the UK. The Act also contains important human rights protections for the fugitive and so the inter-relationship between extradition and human rights is fully covered in the text.

This Guide places the new Act in the context of the previous extradition regime and provides a full commentary on the Act. Although the Act will replace the current wide array of provisions contained in the Extradition Act 1989, many of its provisions are derived from the existing regime.

The Guide therefore draws on existing case law in order to make sense of the new Act for the reader. The Guide deals with the extradition process in chronological order and is fully cross-referenced, allowing for easy use in court. In addition, the Guide will contain useful appendices including the European Arrest Warrant making it an essential reference work for all those practising in the extradition and international crime field.