Blackstone's Guide to the Serious Organised Crime and Police Act 2005 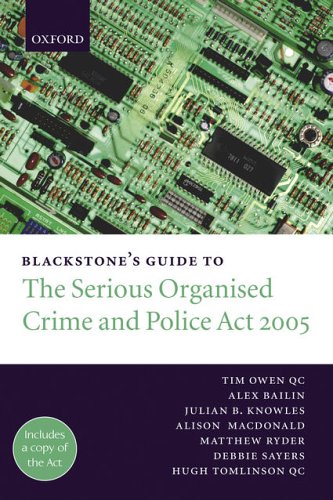 The Blackstone's Guide Series delivers concise and accessible books covering the latest legislative changes and amendments. Published within weeks of the Act, they offer expert commentary by leading names on the effects, extent and scope of the legislation, plus a full copy of the Act itself. They offer a cost-effective solution to key information needs and are the perfect companion for any practitioner needing to get up to speed with the latest changes.

The Serious Organised Crime and Police Act 2005 brings about a radical shake-up of the organisations and powers to fight major crime - most notably by creating the Serious Organised Crime Agency (SOCA). SOCA brings together the National Crime Squad, the National Criminal Intelligence Service, and parts of the customs and immigration authorities; it will have approximately 5,000 civilian staff with powers to arrest and carry out their own investigations.

The Act also overhauls the powers of the police officers contained in the Police and Criminal Evidence Act 1984 - in particular by introducing new 'supergrass' provisions dealing with the use of informant evidence. The Act introduces new public order offences in relation to harassment and protest.

Written by a team of expert practitioners in the area, this Guide comprehensively explains the scope and impact of the Act and highlights the radical changes to the law it makes including the civil liberties and human rights implications. It is structured in a clear and logical way, following the structure of the Act itself, and also contains a full copy of the Act.