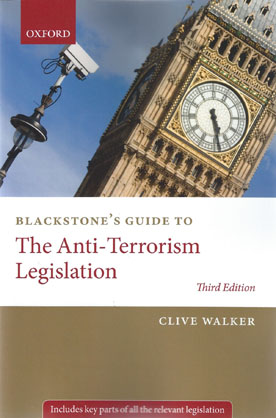 This new edition of the Blackstone's Guide to the Anti-Terrorism Legislation provides expert explanation of the key anti-terrorism legislation.

The book is clearly organized with separate chapters on counter-terrorist powers, terrorist investigation, terrorist offences and special criminal processes. It highlights important case-law relating to the jurisprudence of human rights.

It further explores public perceptions of counter-terrorism measures, desistence from terrorism, and the developing issue of terrorism and the internet. Statistical data is given in all chapters, and there is also analysis and critique of official documents and the reviews from Parliament and the Independent Reviewers of Terrorism Legislation.

The Blackstone's Guide Series delivers concise and accessible books covering the latest legislative changes and amendments. They offer expert commentary by leading names on the effects, extent and scope of the legislation, plus a full copy of the Act itself. They provide a cost-effective solution to key information needs and are the perfect companion for any practitioner needing to get up to speed with the latest changes.