Blackstone's Guide to the Companies Act 2006 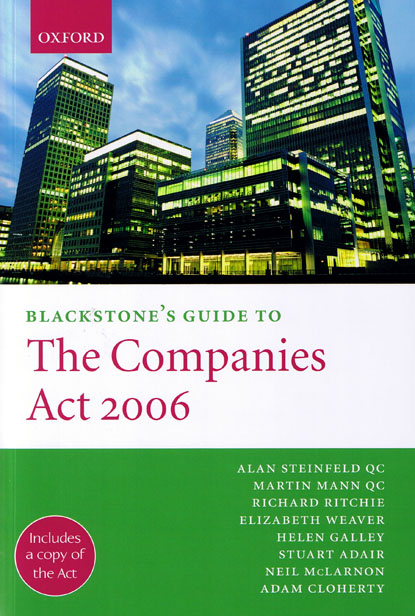 This new Blackstone's Guide provides the complete text of the Companies Act 2006, together with a clear explanation of the legislation and its impact.

The Companies Act is a major piece of legislation - comprising 1264 sections and 16 schedules. It represents an attempt to reform company law for the 21st century in accordance with the Government's stated objectives of encouraging small companies, promoting shareholder involvement and fostering a long term investment culture. It puts whole areas of company law which are the product of the common law on a statutory basis for the first time, and implements EU Directives on Takeovers and Transparency Obligations.

Yet large parts of the current Companies Act 1985 remain in force; practitioners are therefore required to navigate a complex landscape of old and new legislation. This Guide provides a clear analysis of the new legislation, explaining both its genesis and likely effect. The authors adopt a topic-based approach, focussing on the most important changes and developments for both private and public companies.

Contents:
1. INTRODUCTION AND OVERVIEW
2. KEY CHANGES AT A GLANCE
3. NATURE AND FORMATION OF COMPANIES
4. COMPANY CONSTITUTIONS
5. COMPANY AND BUSINESS NAMES
6. MEMBERSHIP OF A COMPANY
7. SHARES
8. ALTERATION AND MAINTENANCE OF CAPITAL
9. PROVISION AND DISCLOSURE OF INFORMATION
10. REGISTRAR AND REGISTER OF COMPANIES
11. MANAGEMENT AND ADMINISTRATION OF COMPANIES
12. DECISION MAKING IN COMPANIES
13. DIRECTORS' DUTIES
14. DERIVATIVE CLAIMS
15. REPORTS AND ACCOUNTS
16. AUDITORS
17. TAKEOVERS
18. OTHER CHANGES
19. TABLE OF RESTATED PROVISIONS
Appendix 1 - The Companies Act 2006
Appendix 2 - Table of Destinations for Companies Act 1985;