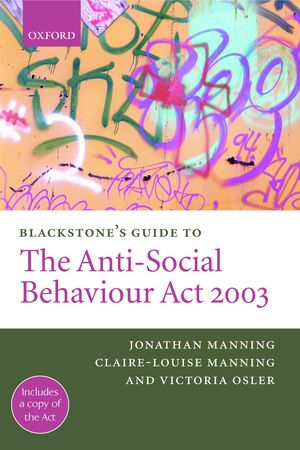 The Anti-Social Behaviour Act 2003 comes into force in stages from February 2004. It is a far-reaching Act, creating new powers for the courts, the police, and local authorities to combat a wide range of behaviour (from truancy to noise nuisance; graffiti to drug dealing; fly-tipping to firearms). It makes major amendments to a wide range of existing legislation (including the Housing Acts 1985, 1988 and 1996, the Environmental Protection Act 1990, the Public Order Act 1986, the Education Act;1996, the Crime and Disorder Act 1998, the Criminal Justice and Public Order Act 1994, the Firearms Act 1968 and the Police Reform Act 2002). Its impact in all these fields is significant. This Guide takes a practical and critical approach to the Act, providing full commentary and background;information on its provisions.

The Guide provides the full context for the many piecemeal and unconnected amendments made by the new provisions, including where necessary, details of the existing law and an overview of where the changes made by the Act will fit within the law as a whole. The Guide is structured clearly and logically, following the Parts of the Act, and is an indispensable reference aid for practitioners in any of the areas touched on by the Act, but particularly, in housing, environmental, education and;criminal law.