Blackstone's Guide to the Terrorism Act 2006 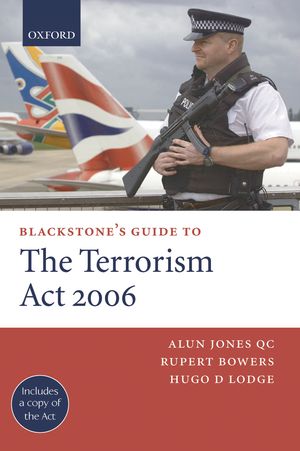 In the immediate aftermath of the London bombings on the 7th July 2005, the government announced very quickly that new anti-terror legislation was to be swiftly enacted. The resulting Terrorism Act has been the subject of intense political and legal debate, and creates a number of new terrorist offences including:-

The new Act also and particularly controversially, extends the time during which police may detain suspects without charge. These new offences combined with the recent establishment of a specialist prosecution unit dealing with terrorist prosecutions, means that investigation into terrorist offences is predicted to become intense and controversial, leading to a far greater number of prosecutions. Similarly, the aggressive use of investigative powers is expected to lead to challenge in the High Court by way of proceedings for judicial review, and there may be challenges to the legality of certain provisions in the higher domestic Courts and in the European Court of Human Rights.

This new Blackstone's Guide offers comprehensive coverage on the new Act, whilst also placing it in the context of what has gone before, namely; The Terrorism Act 2000; The Anti -Terrorism, Crime and Security Act 2001; The Regulation of Investigatory Powers Act 2000; the Prevention of Terrorism Act 2005; and the Serious Organised Crime and Police Act 2005. This body of anti-terror legislation is dealt with in logical order, tracing the criminal process through investigation and arrest right through to prosecution and appeal. At each stage the legislation is discussed with reference to Hansard, the common law, authority in UK and abroad in relation to principles of jurisdiction, human rights, the rules of evidence, and other criminal justice statutes.