International Adjudication on Trial: The Effectiveness of the WTO Dispute Settlement System 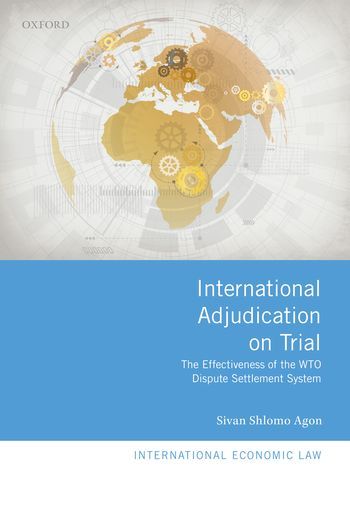 Is the World Trade Organization (WTO) dispute settlement system (DSS) effective? How exactly is the effectiveness of this adjudicative system to be defined and measured? Is its effectiveness all about compliance? If not, what goals, beyond compliance, are the WTO DSS expected to achieve?

Building on a theoretical model derived from the social sciences, this book lays down the analytical framework required to answer these questions, while crafting a revealing insider's account of the WTO DSS-one of the most important and debated sites of the evolving international judiciary. Drawing on interviews with WTO adjudicators, WTO Secretariat staff, ambassadors, trade delegates, and trade lawyers, the book offers an elaborate analysis of the various goals steering the DSS's work, the diverse roles it plays, the challenges it confronts, and the outcomes it produces. Through this insider look at the WTO DSS and detailed examination of landmark trade disputes, the book uncovers the oft-hidden dynamics of WTO adjudication and provides fresh perspective on the DSS's operation and the undercurrents affecting its effectiveness.

Given the pivotal role the WTO DSS has assumed in the multilateral trading regime since its inception in 1995 and the systemic pressures it has recently come to face, this book makes an important contribution towards understanding and measuring the benefits (as well as the costs) this adjudicative body generates, while providing valuable insights into current debates on its reform.

Contents:
Introduction
Part I: Theory, Context, Goals
1: Re-Conceptualizing Judicial Effectiveness at the WTO: Towards a Goal-Based Approach
2: Goals in Context: The Evolution, Structure, and Nature of the WTO Dispute Settlement System
3: WTO Dispute Settlement System: Goals
Part II: When Trade and Non-Trade Values Collide: Linkage Disputes from a Goal-Based Perspective
4: Linkage Disputes and the Enduring Quest for Legitimacy
5: Escaping the Illegitimacy Net: Between Turtles and Shrimps on the High Seas
6: Legitimating Behind the Smoke Screen in the Battle over Clove Cigarettes
Conclusion to Part II: An Analytical Overview of Linkage Disputes
Part III: When Disputes Won't Go Away: Perennial Disputes from a Goal-Based Perspective
7: Trade Wars, Trade-offs, and the International Rule of Law
8: The Multilateral Trade System Goes Bananas
9: The Transatlantic Conflict over Beefed-up Beef
Conclusion to Part III: An Analytical Overview of Perennial Disputes
Part IV: When the Multilateral and the Regional Intersect: RTA-Related Disputes from a Goal-Based Perspective
10: Extending the Analysis: Multilateral Adjudication in a Regionalizing Economic Order
Conclusion
11: WTO Judicial Effectiveness and Beyond