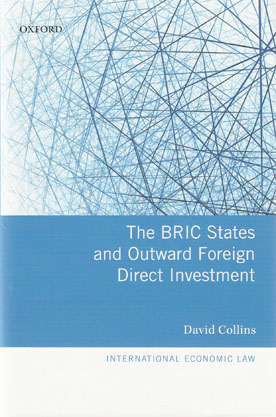 This book examines the relatively recent and under-explored phenomenon of outward foreign direct investment (FDI) from the large emerging market countries, focusing on the four BRIC states (Brazil, Russia, India, and China) and on the services sector meaning primarily telecommunications, finance, and transport.

It considers the international legal framework governing FDI, discussing the nature and extent of the bilateral and regional investment treaty commitments undertaken by each of the BRIC states, including their commitments under the WTO General Agreement on Trade in Services, as well as their obligations as members of the International Monetary Fund and the World Bank.

Drawing on trends observed in the regulatory approach of these countries to FDI in services, including the observed flow of FDI both to and now from the developing world, the book proposes a multilateral investment treaty aimed at the liberalization and protection of FDI in services. The treaty will capture the emerging equilibrium in global FDI patterns signifying a unified approach to the regulation of foreign investment in the growing services economy by developing and developed economies alike.

The treaty will strengthen the legitimacy of investor-state dispute settlement and recognize public interest norms such as environmental protection and human rights as well as allow signatories to retain sovereignty over matters relating to national security and economic stability.