Compensation and Restitution in Investor-State Arbitration: Principles and Practice 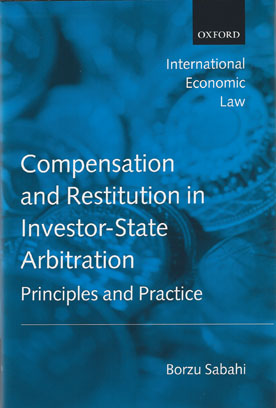 This book examines the history, principles, and practice of awarding compensation and restitution in investor-State arbitration disputes, which are initiated under investment treaties. The principles discussed may be applied to all international law cases where damage to property is an issue.

The book starts by tracing the roots of the applicable international legal principles to Roman law, and from there follows their evolution through the European law of extra-contractual liability and eventually through the Chorzów Factory case to principles of compensation and restitution in the modern law of international investment.

The greater part of the book is then dedicated to examination of the modern application of these principles, focusing on the jurisprudence of international tribunals under various arbitral rules such as ICSID and UNCITRAL Rules. Monetary compensation as the prevalent form of remedy sought and awarded in investor-State disputes is discussed in more detail, including topics such as the amount of compensation for damage resulting from breach of investment treaties or for lawful expropriation of foreign investor's property, a brief overview of valuation methods, supplementary compensation for moral damages, interest, costs, and currency fluctuations as well as various principles that may limit the amount of recoverable compensation, such as causation.

A full chapter is dedicated to the discussion of the theory and practice of awarding restitution in investor-State disputes. The book also covers the general principle of reparation in international law as applied in investor-State arbitrations. The topics discussed cover all the theoretical as well as practical issues which may be raised in awarding compensation and restitution in investment treaty disputes between States and foreign investors.