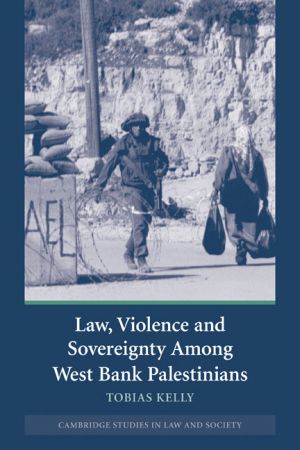 As the Oslo Peace Process has given way to the violence of the second intifada, this book explores the continuing legacy of Oslo in the everyday life of the Israeli-Palestinian conflict. Taking a perspective that sees the Israeli-Palestinian conflict as a conflict over the distribution of legal rights, it focuses on the daily concerns of West Bank Palestinians, and explores the meanings, limitations and potential of legal claims in the context of the region's structures of governance. Kelly argues that fundamental contradictions in the process through which the West Bank has been ruled and misruled have resulted in an unstable mixture of legality, fear and uncertainty. Based on long term ethnographic fieldwork, this book provides an insight into how the wider Middle East conflict manifests itself through the daily encounters of ordinary Israelis and Palestinians, offering an evocative and theoretically informed account of the relationship between law, peace-building and violence.

• Provides a theoretically informed and empirically grounded insight into the processes through which legal rights are distributed in the Israeli-Palestinian conflict • Explores the ways in which the Israeli-Palestinian conflict manifests itself on the ground. In doing so it avoids the reified abstractions which are so often used to analyse the conflict and concerns of ordinary Palestinians • Analyses the relationship between legal practices, citizenship and ethno-national violence