Contesting Immigration Policy in Court: Legal Activism and its Radiating Effects in the United States and France 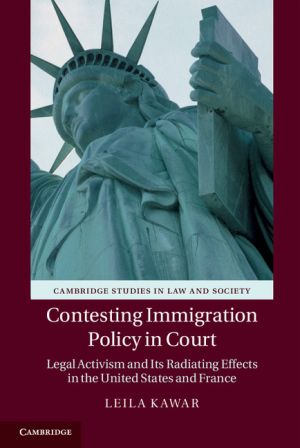 What difference does law make in immigration policymaking? Since the 1970s, networks of progressive attorneys in both the US and France have attempted to use litigation to assert rights for non-citizens. Yet judicial engagement - while numerically voluminous - remains doctrinally curtailed.

This study offers new insights into the constitutive role of law in immigration policymaking by focusing on the legal frames, narratives, and performances forged through action in court. Challenging the conventional wisdom that 'cause litigation' has little long term impact on policymaking unless it produces broad rights-protective principles, this book shows that legal contestation can have important radiating effects on policy by reshaping how political actors approach immigration issues.

Based on extensive fieldwork in the United States and France, this book explores the paths by which litigation has effected policy change in two paradigmatically different national contexts.