Iraq and the Crimes of Aggressive War: The Legal Cynicism of Criminal Militarism 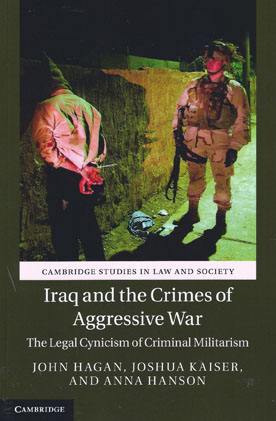 From the torture of detainees at Abu Ghraib to unnecessary military attacks on civilians, this book is an account of the violations of international criminal law committed during the United States invasion of Iraq.

The authors show how an initial cynical framing of the American war led to the creation of a new Shia-dominated Iraq state, which in turn provoked powerful feelings of legal cynicism among Iraqis, especially the Sunni.

The predictable result was a resilient Sunni insurgency that re-emerged in the violent aftermath of the 2011 withdrawal. Examining more than a decade of evidence, this book makes a powerful case that the American war in Iraq constituted a criminal war of aggression.

Contents:
Prologue
1. The reign of terror
2. A shadow of hope
3. Judging torture in Iraq
4. Night falls on Baghdad
5. The separate peace of the Shia
6. Legal cynicism and Sunni militancy
Epilogue.