Temporary Labour Migration in the Global Era: The Regulatory Challenges 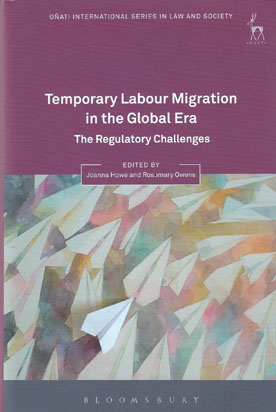 This is the first academic legal book on temporary labour migration. Its aim is to open up a discussion on the topic through essays by leading scholars in law, economics, sociology and political science, using a comparative and interdisciplinary method.

The legal regulation of temporary labour migration in the global era is highly topical but under-researched, despite the extraordinary growth in this phenomenon. There is scarcely a nation state that is not now touched by labour migration.

In 2015 it is estimated there are more than 232 million persons working in a country other than their country of origin. Migration is thus a labour issue and labour mobility has become a key feature of the global economy.

Prestigious global institutions promote temporary labour migration as a means of development for poorer nations and as a ‘triple win’, benefitting countries of origin and destination, as well as individual migrants.

The case in support is often articulated in one-dimensional fashion, focusing on economic outcomes and marginalising other factors.

This edited collection provides an opportunity for a more robust examination of temporary labour migration through a broader consideration of the nature and distribution of any economic benefits.