Shooting to Kill: Socio-Legal Perspectives on the Use of Lethal Force 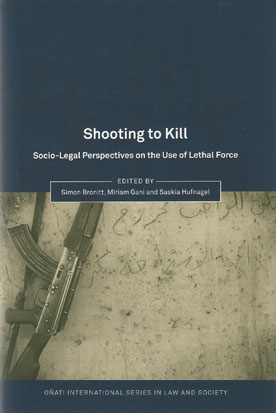 The present book brings together perspectives from different legal fields to examine the significant legal, moral and political issues which arise in relation to the use of lethal force in both domestic and international law.

These issues have particular salience in the counter-terrorism context following 9/11 (which brought with it the spectre of shooting down hijacked airplanes) and the use of force in Operation Kratos that led to the tragic shooting of Charles Menezes.

Concerns about the use of excessive force however are not confined to the terrorist situation. The essays in this collection examine how the state sanctions the use of lethal force in varied ways: through the doctrines of public and private self-defence and the development of legislation and case law that excuses or justifies the use of lethal force in the course of executing an arrest, preventing crime or disorder, or protecting private property.

An important theme is how the domestic and international legal orders intersect and continue to influence one another. While legal approaches to the use of lethal force share common features, the context within which force is deployed varies greatly. Key issues explored in this volume are the extent to which domestic and international law authorise pre-emptive use of force, and how necessity and reasonableness are legally constructed in this context.