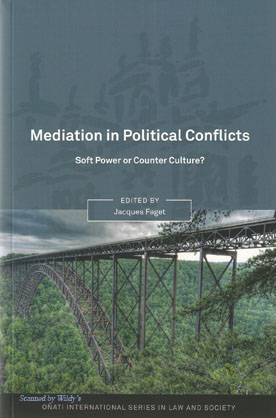 This book provides a vivid reader on experiences of mediation throughout history and in many different regional, cultural and legal contexts.

For experts in the field of mediation and legal anthropology it provides a series of fascinating case studies not previously reported on. For those not familiar with the field it provides a window on an alternative possibility for peacemaking in political conflicts.

The book is held together by the editor's introduction, which defines political mediation, the research methodologies employed, the relationship of mediation to participatory democracy, and the growth of mediation in the past twenty years.

The chapters which follow provide the anatomy of successful and unsuccessful mediations in contexts as widely diverse as the 30 Years War (1618-1648) which was ended following the intercession of the future Pope, Alexander VII.

Three further chapters examine the role of the Catholic Church in other mediations - in the Basque conflict, in Burundi and in Chiapas, while a further group of chapters looks at conflicts in Ethiopia, Northern Ireland, Central America and Congo.

Contents:
1. The Metamorphosis of Peacemaking
Jacques Faget
PART I: ETHICAL STAKES OF MEDIATION PRACTICES
2. Historical Contribution to the Ethical and Methodological Principles of Mediation
Manel Canyameres and Anne Catherine Salberg
3. Human Rights and Mediation—A Much Discussed but not Resolved Relationship: Views on International
Cooperation
Viola Boelscher
PART II: THE CATHOLIC CHURCH AS POLITICAL MEDIATOR
4. The Power of Powerlessness: Religious Actors' Peaceful Mediation in the Basque Conflict
Xabier Itçaina
5. From 'Charity' to 'Mediation', From the Roman Suburbs to UNESCO: The Rise of the 'Peace Brokers'
of the Community of Sant'Egidio
Pierre Anouilh
6. The Catholic Church as Mediator in the Chiapas Conflict
Pilar Gil Tébar
PART III: MEDIATION PROGRAMMES IN EUROPE AND AFRICA
7. Management of Violence and Mediation Practices at Urban Interfaces in Northern Ireland
Elise Féron
8. A Bridge to Lasting Peace: Post-Conflict Reconciliation and Mediation in Burundi and the Democratic
Republic of Congo
Aurélien Colson and Alain Pekar Lempereur
9. Traditional Approaches and their Relevance to Coping with Contemporary Conflicts: Experiences
from a Border Region in Africa
Monika M Sommer
10. Conclusion