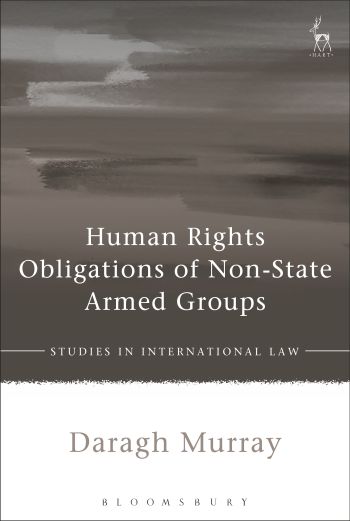 Of particular interest is the de facto control theory and the possibility that international law may be applied in the absence of direct treaty regulation. Application of this theory is dependent upon an armed group’s establishment of an independent existence, as demonstrated by the displacement of State authority. As such, armed groups are treated as a vertical authority, maintaining the established hierarchy of international regulation.

At issue is not a radical approach to the regulation of non-State actors, but rather a modification of the traditional means of application in response to the reality of the situation.

Finally, if international human rights law is to be applied to armed groups its application must be effective in practice. A context-dependent division of responsibility between the territorial State and the armed group is proposed. The respect, protect, fulfil framework is adapted to facilitate the application of human rights obligations in a manner consistent with the control exerted by both the State and the armed group.

The Responsibility to Protect and the Failures of the United Nations Security Council
P.M. Butchard
ISBN 9781509930807
To be published March 2020
Hart Publishing
£80.00

The Interception of Vessels on the High Seas: Contemporary Challenges to the Legal Order of the Oceans (eBook)
Efthymios Papastavridis
ISBN 9781782250852
Published March 2013
Hart Publishing
£30.58 + £6.12 VAT