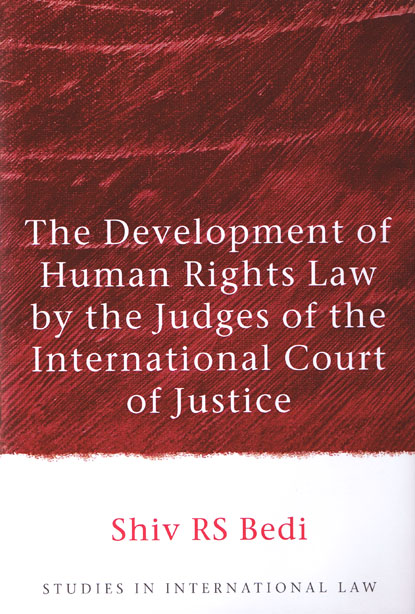 The jurisprudence of the International Court of Justice generally demonstrates that no rule of international law can be interpreted and applied without regard to its innate values and the basic principles of human rights. Through its case-law the ICJ has made immense contributions to the development of human rights law, and in so doing continues to provide solutions to mounting international problems, such as terrorism and unilateral use of force.

Hence human rights law is more a school of law than merely a normative branch of international law, and the ICJ's willingness to engage in the development of human rights law depends upon which judicial ideology its judges subscribe to.In order to evaluate how this human rights spirit is manifested, or occasionally not manifested, through the vast jurisprudence of the ICJ.

Parts II and III critically examine the Court's principal contentious and advisory cases in which it has treated human rights questions. The legal reasoning of the Court and the opinions appended to its decisions by its individual judges are analysed in light of the principle of human dignity and the doctrine of human rights

Contents:
1. Introduction 1
Part I Perspective: Legislative Role of the Judge and Human Rights Law
2. Legislative Role of the Judge: A Vital Force in the Life of the Law
3. Relationship between Human Rights and International Law:
Principle of Human Dignity versus Principle of State Sovereignty:
Part II The Development of Human Rights Law by the International Court of Justice: Contentious Cases
Introduction to the Contentious Procedure of the Court
4. Corfu Channel case (United Kingdom v Albania) (1947-1949)
5. South West Africa cases (Ethiopia v South Africa; Liberia v South Africa): Violation of Human Rights Law Led to Formation of Human Rights Law (1960-1966)
6. Barcelona Traction, Light and Power Company, Limited (New Application: 1962) case (Belgium v Spain) (1962-70)
7. United States Diplomatic and Consular Staff in Tehran case (USA v Iran) (1979-1981)
8. Military and Paramilitary Activities in and against Nicaragua case (Nicaragua v USA) (1984-1991)
9. East Timor case (Portugal v Australia) (1991-1994): Human Rights versus State Sovereignty (1991-1994)
10. Application of the Convention on the Prevention and Punishment of the Crime of Genocide Case (Bosnia and Herzegovia v Serbia Montenegro) (1993- ) Prohibition of Genocide as Jus Cogens
11. Legality of Use of Force cases (Yugoslavia v Belgium; Yugoslavia v Canada; Yugoslavia v France; Yugoslavia v Germant; Yugoslavia v Italy; Yugoslavia v Netherlands; Yugoslavia v Portugal; Yugoslavia v Spain; Yugoslavia v UK; Yugoslavia v USA) (1999- )
12. Arrest Warrant of 11 April 2000 (Democratic Republic of the Congo v Belgium): An Analysis of Human Dignity of the People, for the People by the People (2000-2002)
13. Vienna Convention on Consular Relations cases (1998-2004): The Convention Does Create Individual Rights
Part III The Development of Human Rights Law by the International Court of Justice: Advisory Cases
Introduction to the Advisory Procedure of the Court
14. International Status of South West Africa case (1949-1950) The Principle of Sacred Trust of Civilization
15. Reservations to the Convention on the Prevention and Punishment of the Crime of Genocide case (1950-1951)
Genocide is Supremely Unlawful and its Principles are Binding on All Parties Irrespective of being Party to a Convention
16. Legal Consequences for States of the Continued Presence of South Africa in Namibia (South West Africa) Nothwithstanding Security Council Resolution 276 (1970) case (1970-1971)
17. Western Sahara case (1974-75) The Principle of Self-Determination
18. Applicability of Article VI, Section 22, of the Convention on the Privileges and Immunities of the United Nations case (1989)
19. Legality of the Use by a State of Nuclear Weapons in Armed Conflict case (request by World Health Organization) (1993-1996)
20. Legality of the Threat or Use of Nuclear Threat case (request by UN General Assembly): -May Use; May not Use; But Do not Use. Hence, Legislate: MAY NOT USE- (1994-1996)
21. Difference Relating to Immunity from Legal Process of a Special Rapporteur of the Commission on Human Rights (1998-1999)
22. Legal Consequences of the Construction of a Wall in the Occupied Palestinian Territory (2003-04): Belligerent Occupation and Human Rights
23. Summary and General Conclusion