Promises of States under International Law 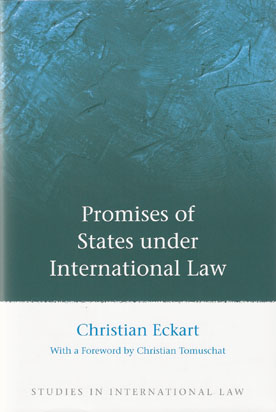 This book is concerned with the type of unilateral declaration that arises when a State announces its intention to follow a certain future course of conduct. Such declarations are extremely common, as a look at the weekly headlines of any major newspaper will quickly reveal.

Many of these declarations made at the highest level are, of course, extremely vaguely expressed and are far from possessing a tangible legal commitment. But others deliver a very clear message, for instance the US's April 2010 declaration on the future use of nuclear weapons, or Kosovo's declaration of independence pledging to, inter alia, follow to its last letter the Ahtisaari Plan, may be taken as two very recent and prominent examples of unilateral declarations at the international level. In looking at such declarations, the book raises, as well as answers, the question of the precise legal value of such pledges in the realm of public international law.

However, while such State 'promises' are broadly accepted as existing in the international legal sphere, the legal framework for such promises turns out to be far from clear, despite the ILC's 'Guiding Principles' adopted in 2006. Indeed the Principles left many vital issues unanswered, which is why this book's attempt to address and present answers to the topic's difficulties is particularly to be welcomed.

Based on a thorough examination of the ICJ case law, State practice, scholarly writings and opinions within the ILC, this is the first book to present a comprehensive overview of the legal effect of promises by states in international law.

Contents:
Introduction
I The Presumed Rareness of Promises
II A Legal Framework with Many Open Questions: A First Look
III The Need for a Clear Assessment of the Applicable Law
IV Approaching the Topic
1.
Delimiting the Subject: Promise as a Unilateral Act
I Drawing from the Definition of Unilateral Acts
II Distinguishing Promises from Other Classes of Unilateral Acts
III A Manifestation of Will to Create a Legal Obligation
IV Unilateral
V Promises of States Only
2.
A History of Promises
I Important Cases and State Practice
II Concluding Remarks on the History of Promises
3.
The Law on Promises
I Promises and the Sources of International Law
II The ILC's Guiding Principles
III Legal Basis for the Bindingness of Unilateral Promises
IV On the Intention to be Legally Bound
V Further Requirements
VI The Revocability of Promises
VII Modifying Promises
VIII Promises and Estoppel
IX Summarising the Legal Framework
4.
Looking Ahead: A 'Promising' Future?
I Straitjacket vs Empowering Rule
II Unilateral Promises and Bilateral Commitments
Concluding Remarks