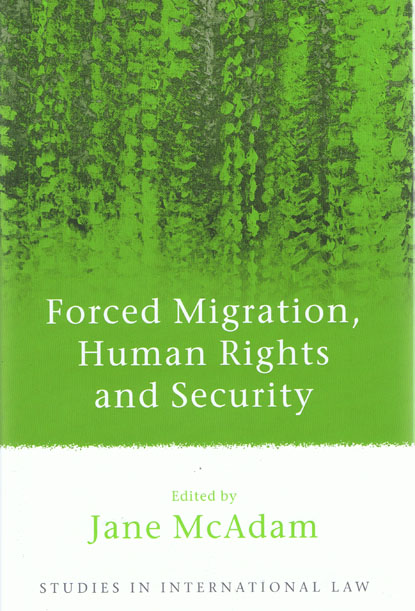 The international protection regime for refugees and other forced migrants seems increasingly at risk as measures designed to enhance security—of borders, of people, of institutions, and of national identity—encroach upon human rights. This timely edited collection responds to some of the contemporary challenges faced by the international protection regime, with a particular focus on the human rights of those displaced.

The book begins by assessing the impact of anti-terrorism laws on refugee status, both at the international and domestic levels, before turning to examine the function of offshore immigration control mechanisms and extraterritorial processing on asylum seekers' access to territory and entitlements (both procedural and substantive).

It considers the particular needs and rights of children as forced migrants, but also as children; the role of human rights law in protecting religious minorities in the context of debates about national identity; the approaches of refugee decision-makers in assessing the credibility of evidence; and the scope for an international judicial commission to provide consistent interpretative guidance on refugee law, so as to overcome (or at least diminish) the currently diverse and sometimes conflicting approaches of national courts.

The last part of the book examines the status of people who benefit from 'complementary protection'—such as those who cannot be removed from a country because they face a risk of torture or cruel, inhuman or degrading treatment or punishment—and the scope for the broader concept of the 'responsibility to protect' to address gaps in the international protection regime.

Contents:
1. Forced Migration: Refugees, Rights and Security Guy S Goodwin-Gill
2. Resolution 1373—A Call to Pre-empt Asylum Seekers? (or 'Osama, the Asylum Seeker') Penelope Mathew
3. National Security and Non-Refoulement in New Zealand: Commentary on Zaoui v Attorney-General (No 2) Rodger Haines QC
4. Offshore Barriers to Asylum Seeker Movement: The Exercise of Power without Responsibility? Savitri Taylor
5. The Legal and Ethical Implications of Extraterritorial Processing of Asylum Seekers: The 'Safe Third Country' Concept Susan Kneebone
6. Re-thinking the Paradigms of Protection: Children as Convention Refugees in Australia Mary Crock
7. Wearing Thin: Restrictions on Islamic Headscarves and Other Religious Symbols Ben Saul
8. Subjectivity and Refugee Fact-Finding Arthur Glass
9. Towards Convergence in the Interpretation of the Refugee Convention: A Proposal for the Establishment of an International Judicial Commission for Refugees Anthony M North and Joyce Chia
10. The Refugee Convention as a Rights Blueprint for Persons in Need of International Protection Jane McAdam
11. The Responsibility to Protect: Closing the Gaps in the International Protection Regime Erika Feller